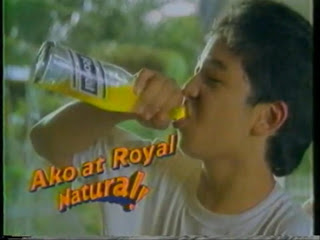 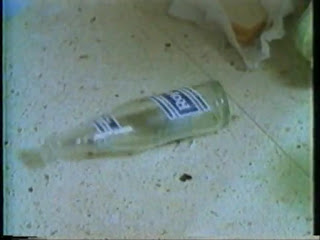 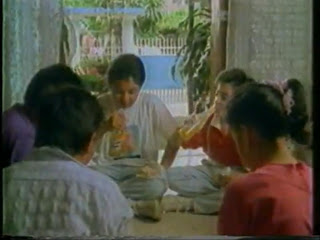 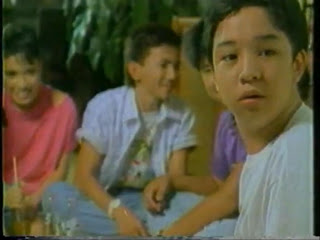 Do you know them?

What a rare gem I found on the internet!  As I was updating this blog just now, which I haven't done in a looonnnggggg timem, I found this cute picture online! 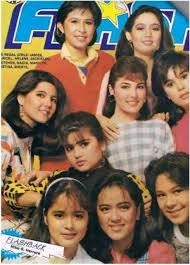 Can you name them by giving their FULL names? :)


Click WATCH to watch the movie.  Thanks to Mr. Jojo Devera for the upload.  No copyright infringement intended. 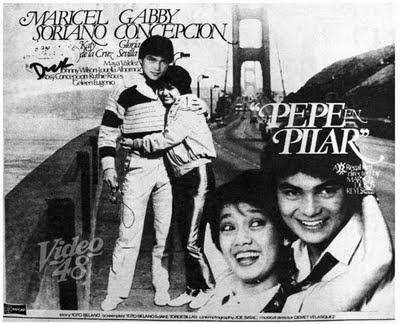 Are you a fan of Maricel Soriano?  If not, how about of Mr. Gabby Concepcion??? Okay, if your answer is still NO then I guess your answer to my next question will be a YES.  Why am I so certain?  It's because you will not be here in my blog if you're not.  So, the question is "Are you an 80's nostalgic?"  I hope your answer is a yes. :)

As I've promised, SEVERAL TIMES but only now will I ever comply, here is one 80's movie that for sure left a mark in the hearts of the Filipinos back in the days.  Who would not remember the handsome face of Gabby?  On the side, who would not like Maricel's katarayan and katalakan?  Well, if you don't, I do.

Just a trivia, this movie is just a remake of a 1966 film of the same title starring the King of Comedy, Dolphy, and the beautiful Ms. Susan Roces.  But, is Pepe Ms. Susan and The King of Comedy as Pilar??? Interesting!!! 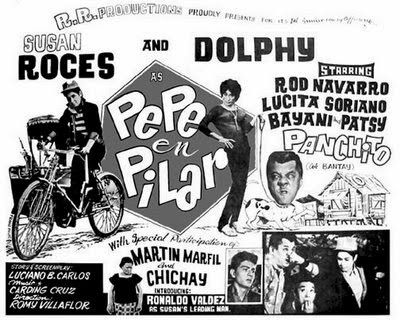 So, sit back, relax and enjoy as you watch this 80;s film entitled Pepe and Pilar.

Wow, time flies fast indeed!  It has been a year or two since I last blogged here.  I miss it, very much.  I miss the feeling of reminiscing and hearing from others who like to do the same.  A lot has happened and most of it were the reasons why I hadn't had the time to blog.  But, as they say, there is a light at the end of the tunnel so I guess that means positivity.  Now, I will try to post again.  Hopefully to entertain you, make you reminisce and think of the good ole days, and somehow help you relax and forget about your problems.

80's... sigh... Thinking about it, this decade has slowly gone far in the past.  Kids of today have no recollection whatsoever of what this decade is about.  Being a preschool teacher myself, kids of today are far so different from the kids back in the eighties.  Forgive me but I am really a nostalgic person.  I love feeling nostalgic every now and then.  Thinking about the happy times in the past sort of help me get rid of stress.  Weird?  I hope not.

I was once an 80's kid... now, I've grown old.  Well, not very old but OLD.  I can no longer afford to just live my day without thinking of things like providing for my needs, work, work, and work. :(  Admittingly, I  am not having as much fun in work lately.  And whenever I am feeling that, automatically nostalgia kicks in! :)  Well, I guess blogging again will me do me good.  Doing this (blogging) actually makes me happy.  And who doesn't want to be happy?  So, let me gear up and in the days to come you'll see my posts again.  I hope I will not break what I said. :) 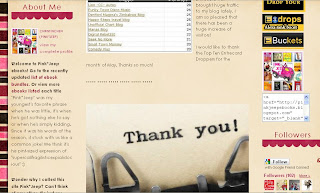 If you are into blogs and you are looking for a worthy one
to visit, check out Pink Jeep's blog!

I especially like her Music Monday segment which
features songs of the past.
She even has other segments
like Tuesday
Couch Potatoes,
Wordless Wednesday & many more!

She discusses anything under the sun
& may I tell you SHE CAN
REALLY WRITE!!!

I also find it very interesting & also funny
on how she came up with her
blog's name: PINK JEEP.
You wanna know how?
Check out her blog now!
PINK*JEEP

Champoy is an iconic 80's tv series. The show was put to life by three of the greatest filipino comedians and comedienne: Subas Herrero, Noel Trinidad and Tessie Tomas. It was aired in 1981 and as far as I know it's home network was RPN 9.

Fortunately, with the generosity and extreme kindness of one of 80's Pinas' readers, we now have the opportunity to once again laugh genuinely through these priceless Champoy clips. This particular episode, entitled Suicidal Man, is an epic yet classic Filipino style comedy.

It all started with a man (played by Noel Trinidad) who wants to take his own life by jumping off a building. A concerned woman (played by Cherie Gil) tries her best to convince a very apathetic policeman (played by Subas Herrero) to save the "suicidal man". 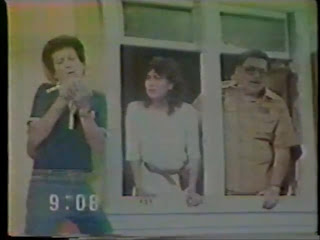 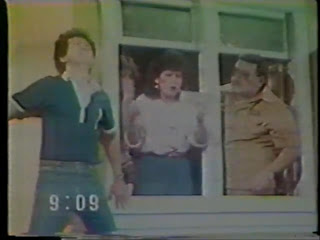 Georgina (played by Mitch Valdez) joins the rumble & scramble by demanding Mr. Suicidal Man to choose between her and the wife and she threatens the man that if she will not be chosen she will also jump off the building. Upon hearing this threat, the angry wife stepped out of the window too while saying "Akala mo ikaw lang ang marunong magpakamatay!". 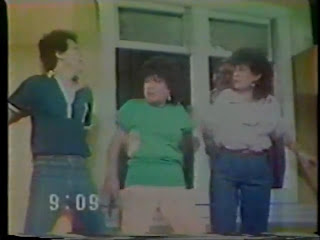 If it were not for betaxfer1 who uploaded these video clips, I would never have the chance to see this funny yet tasteful & classic Filipino comedy show. As what they always say, the past is always better than the present. I couldn't agree more!


Let us drown with nostalgia as we watch the video clips courtesy of betaxfer1! =) 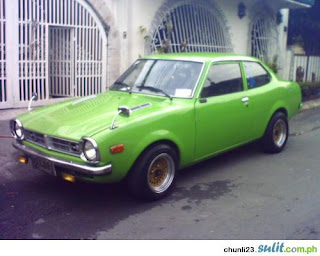 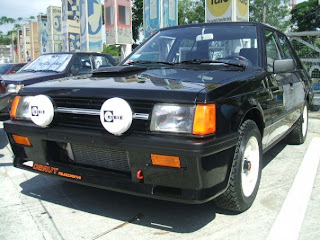 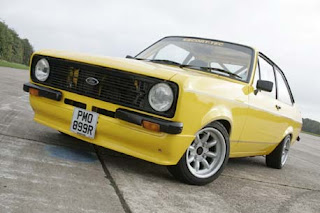 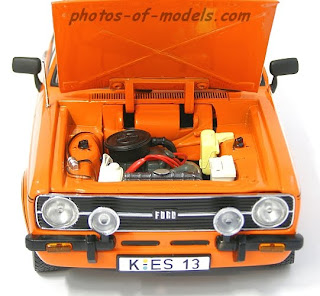 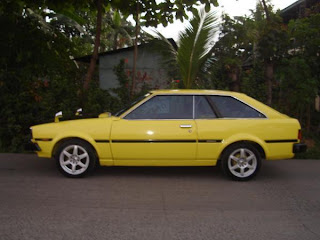 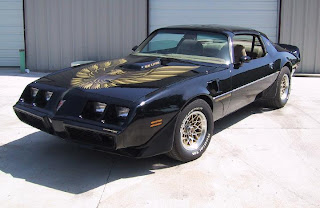 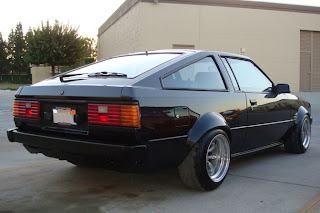 I was so happy yesterday! Why??? I had the opportunity to watch NINJA KIDS once again in PBO!!! Who wouldn't be happy with that? And so in return, I would like to add a new segment here in my blog.

WHAT NEW SEGMENT?
My newest segment would be A POST OF PBO's TV SCHEDULE of 80's Pinoy movies!
For the month of March, PBO has instored for us a wide variety of quality pinoy films. So for those 80's Pinas readers and visitors who have access to PBO, take note of their schedule.

This segment will be posted on the right side of the blog so check it out once-in-awhile! Who knows? You might find a movie or two that you've been dying to watch again! ;)

Dolphy's ONCE UPON A TIME movie 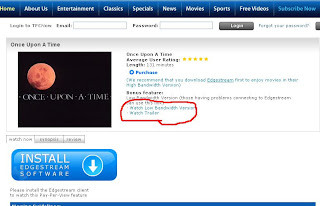 Don't tell me you are not familiar with Dolphy's Once Upon A Time movie?
Chance of a lifetime or what??? I found the TFC Now website and they are offering a free viewing of the trailer and the movie!

Click on the link or the picture for more details. =) 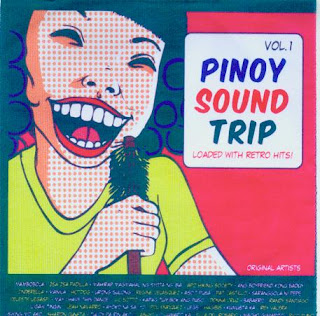 photo image courtesy of thxrecords
What could have been more thrilling than Pinoy sound trippin'? Make it the 80's Music Waves and you'll definitely get high. I love this picture I found from thxrecords wordpress site. He also has a wide genre of music to offer. 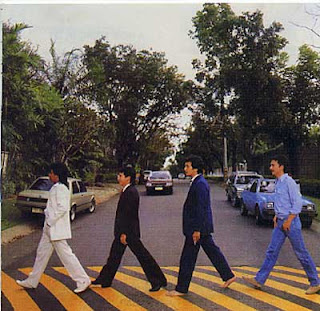 Photo image courtesy of Ferddie's World
After featuring songs from VST & Co., Rico J. Puno, Claire Dela Fuente, Hotdog and Boyfriends, we are now adding new songs to our list! Of course, if we are talking about chilling 80's style with 80's music one would not fail to bring up the band that entertained us for decades--The Apo Hiking Society! 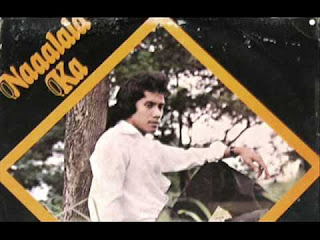 click photo to watch Rey Valera perform
Oh no, he's not Romeo but wait 'til you hear his songs. Another singer who impressed us with his soothing vocals is no other than Mr. Rey Valera. His songs are indeed nostalgic and pleasing to the ears. I will never forget his life story as well. He's been through a lot and those experiences gave melody to his words. 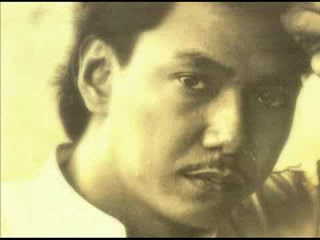 Last and definitely not the least, the music legend Mr. Basil Valdez. Kastilyong Buhangin, who wouldn't have an LSS (last song syndrome) with that song? Need I say more?


Enjoy listening to these new songs!

80's stuff from this blog? SEARCH!

Do you know Monetter Rivera? Meet her daughter! NEW!

The quintessential coming of age movie of the 80's: Bagets! Relieve the memories of the past thru these movies. Enjoy!!!
Bagets 1 (Full movie)
Bagets 2 (Full movie)

Care to have some Champoy?

Thanks to betaxfer1 for sharing with us all these wonderful video clips. <3

Courtesy of afrmonline2, here are video clips of Menudo while they were visiting the Philippines during the 80's:

Are YOU a collector of rare find pinoy movies???

If your answer is yes, how would you like to trade or swap them for other movie titles that you lack?

Visit Movie Marathon for a comprehensive list of pinoy movies that you can choose from.

Read on blogs and see pictures about various pinoy tv programs, tv commercials and movies here. Let's have a trip back to memory lane as we reminisce the times when we actually see them! =]

Enjoy other 80's information on these sites! =]

80's Pinas
Having been born in 1982, I grew up watching pinoy tv programs and movies. These molded and defined my childhood years. Often suffering from nostalgia, I made this blog. I sort of want to reconstruct my past and try to relive it once in awhile. Who could forget the 80's? The years passed and things changed. Today is very different, far and distant from the past. But thanks to technology I can somehow do the best that I can to teleport into the past..the 80's! =)